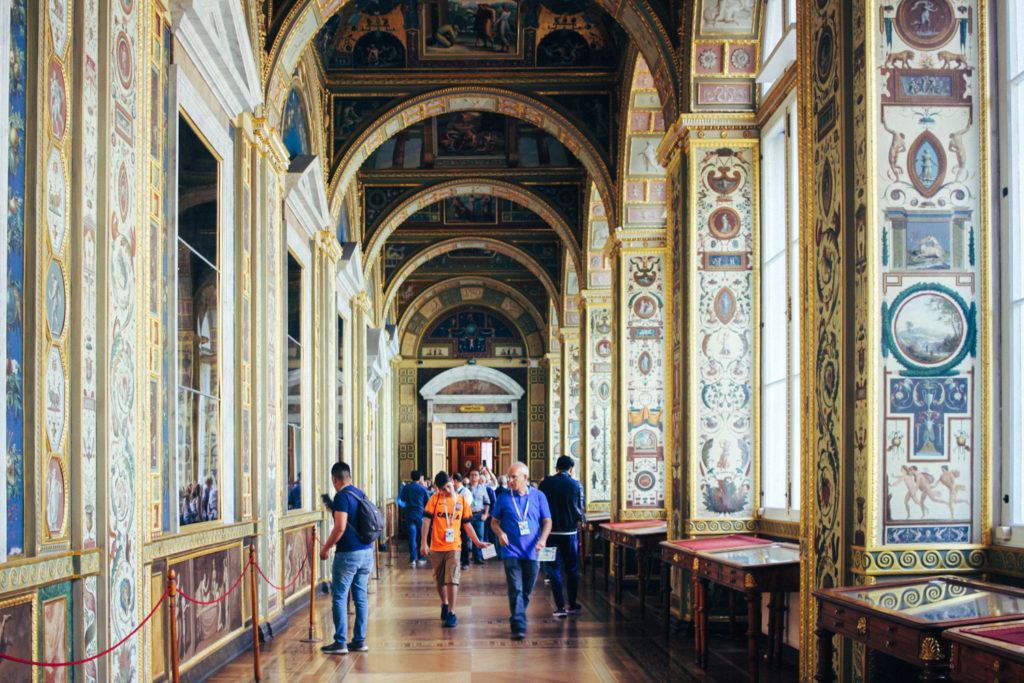 Last summer, an opportunity to visit Russia came out of the blue.

I was in Tbilisi, Georgia, when my friend Nicole told me she had an extra FAN ID for the World Cup. Having a FAN ID bypasses the normal visa process, so she suggested I apply. “It’s a long-shot that your application will be approved in time,” she warned.

Shockingly, it was approved six hours later. I booked a flight to Moscow later that day.

Although I didn’t make it in time for the World Cup match, I still got to spend four days in Moscow and St. Petersburg with some of my good friends. I’ve wanted to visit Russia since I was a child, so getting the chance to travel there was a dream.

Here’s why visiting Russia was just as magical as I imagined.

Due to watching Anastasia as a kid, I imagined Russia as an elegant, snowy place filled with ballrooms and girls in velvet dresses. What I found wasn’t too far off.

As I explored Moscow and St. Petersburg, I stumbled upon elegant architecture, baroque buildings, and horse-drawn carriages. Though I’ve never visited Vienna, I imagine it has a similar ambiance.

Just look at this café in Moscow. 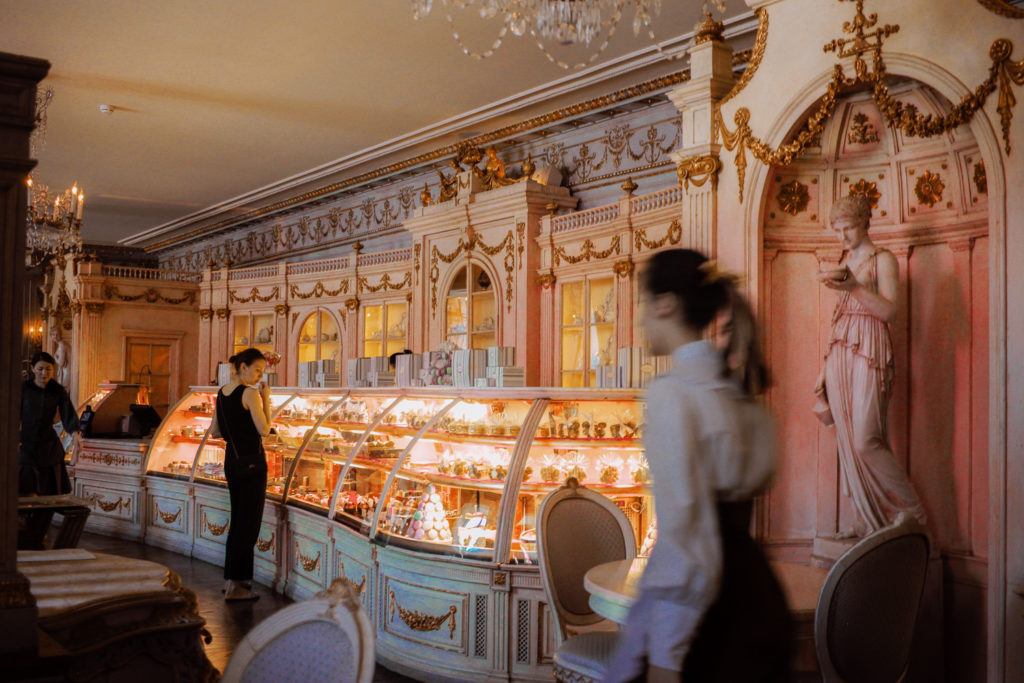 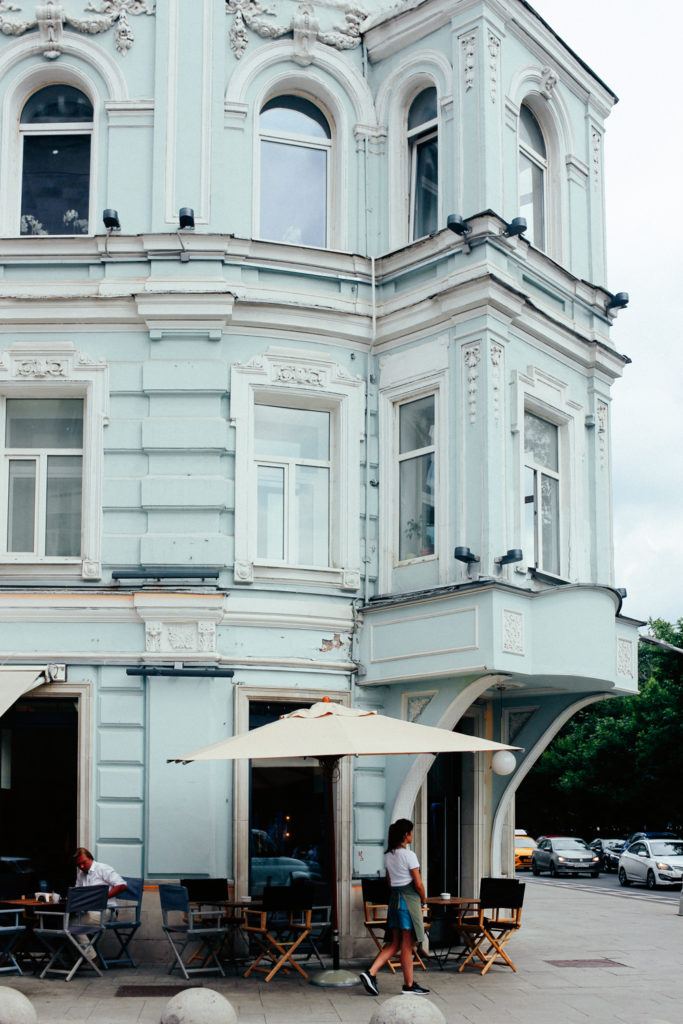 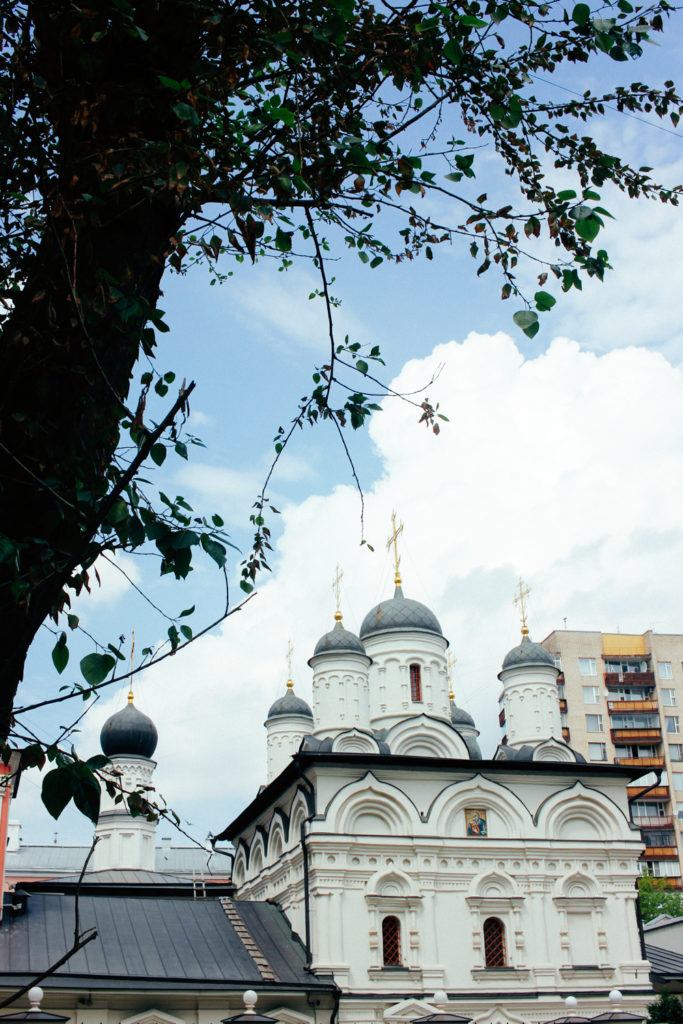 Russian history has to be some of the most interesting in the world. It encapsulates the Romanovs, revolutions, dictators, the rise and fall of the Soviet Union… and that’s just the 20th century.

Reading Lenin’s Tomb, a fascinating book about the last days of the Soviet Union, made the experience even richer. 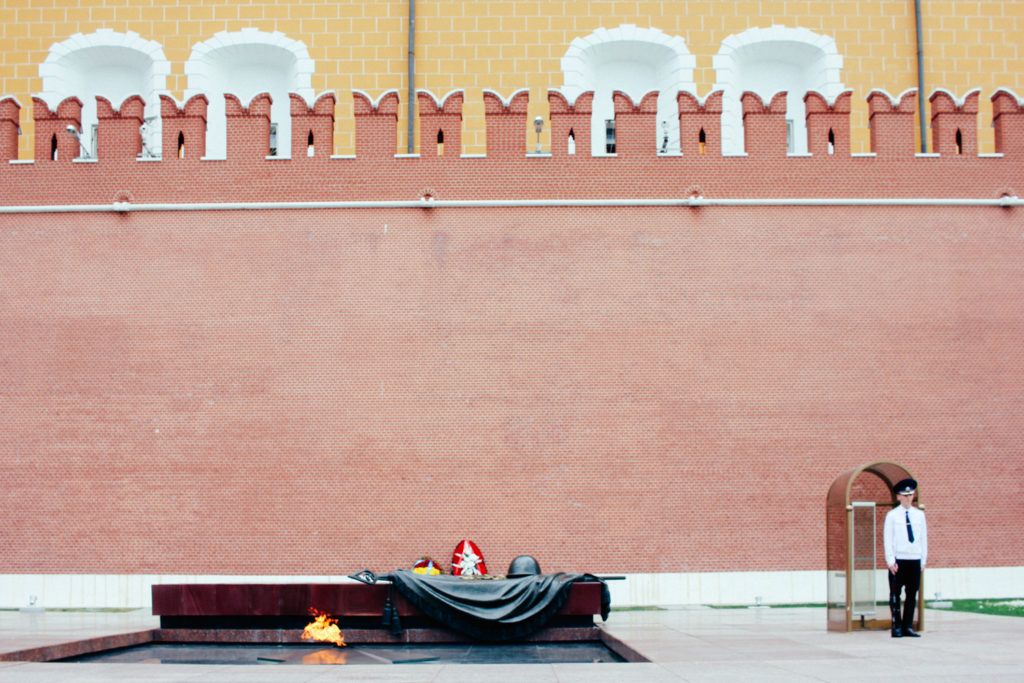 3. Seeing the Red Square in Moscow

You know those travel moments you’ve always dreamed about, like seeing the Taj Majal or Eiffel tower for the first time?

The Red Square lived up to everything I’d imagined and more.

Tips for visiting the Red Square: Visit the Kremlin, which is the former Russian citadel that dates back to the Middle Ages. Check here to book a private English-language tour in advance. I also recommend visiting Lenin’s Mausoleum. 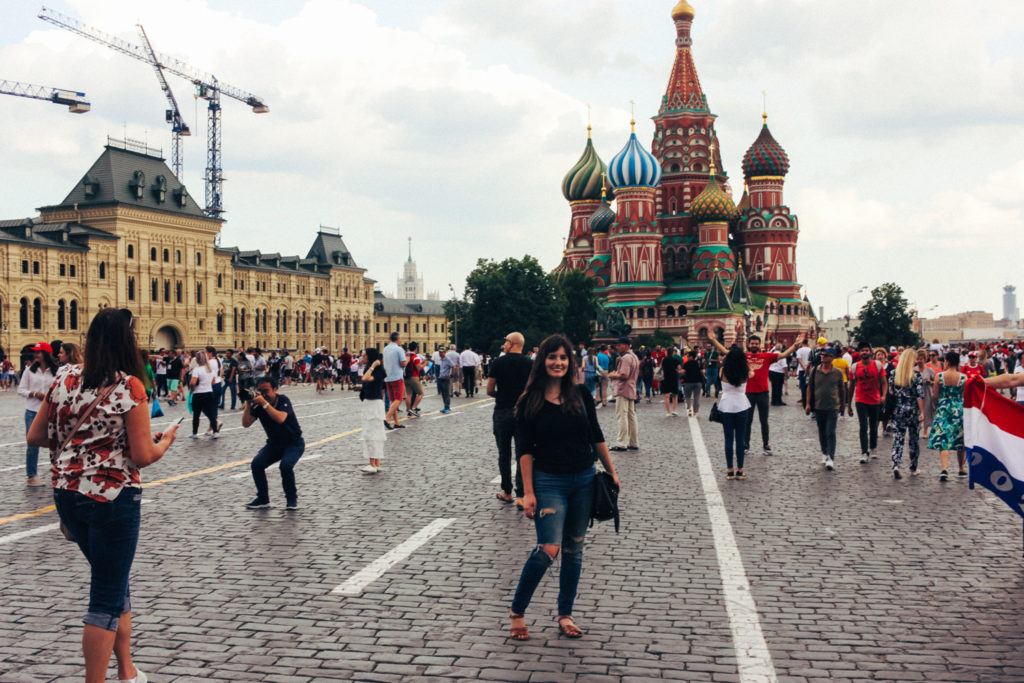 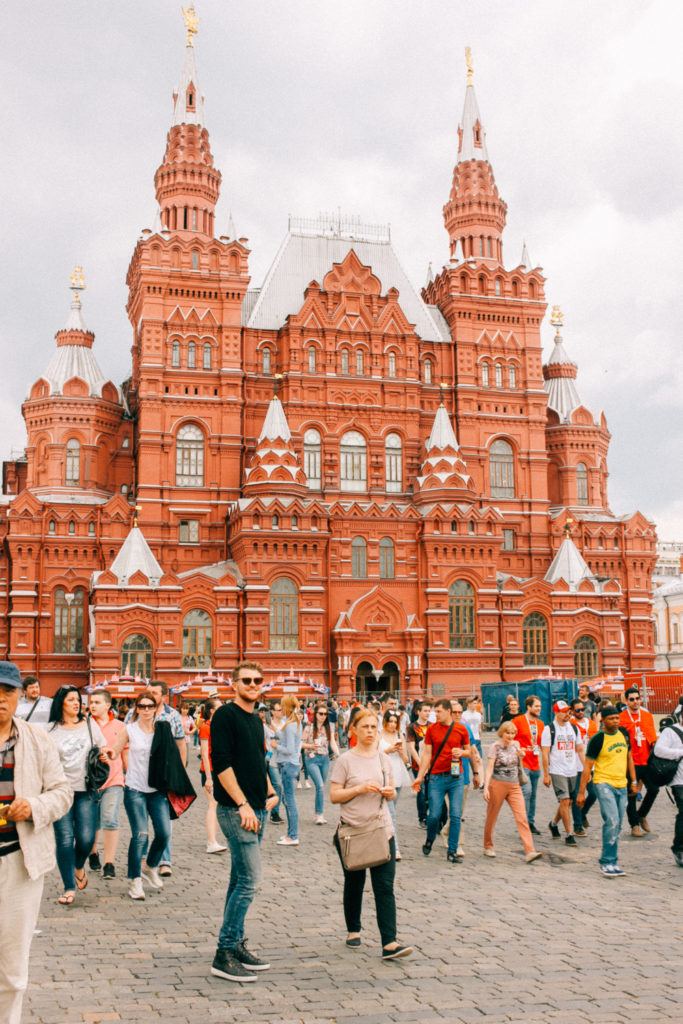 My friend Mike in front of the Russian State Historical Museum 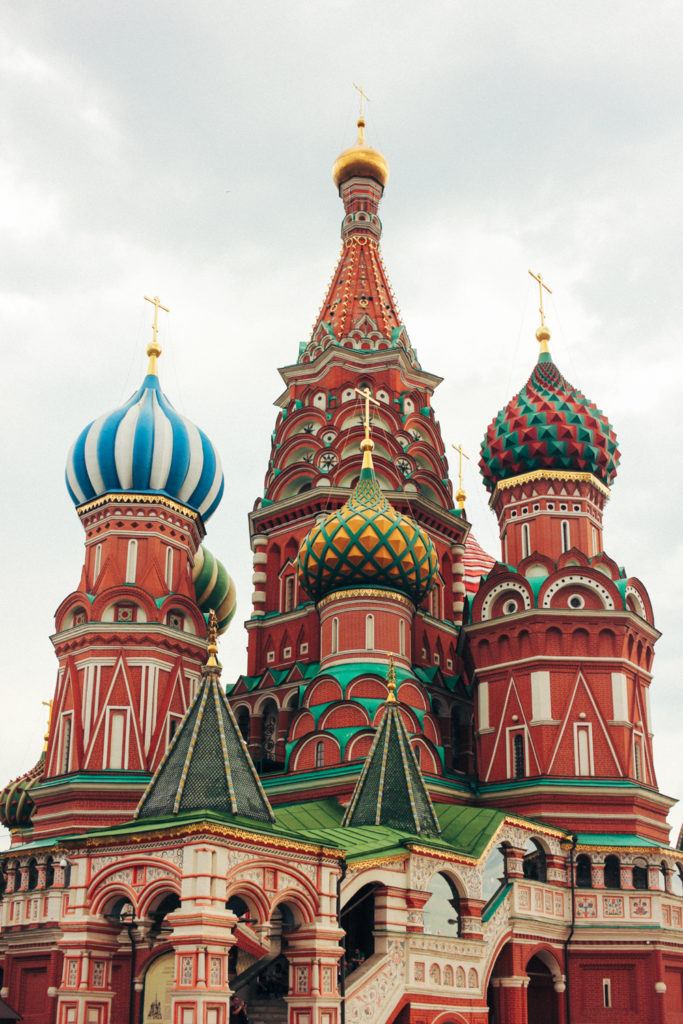 The Moscow Metro must be the most beautiful subway system in the world. Lined with white marble and dotted with crystal chandeliers, these underground palaces more closely resemble ballrooms than subway stations.

Apparently, this was thanks to Stalin, who envisioned metro stations that would be “palaces of the people.”

Tip – If you want to see the Moscow metro’s most beautiful stations under the guidance of a tour leader, you can book a Moscow metro station tour here. 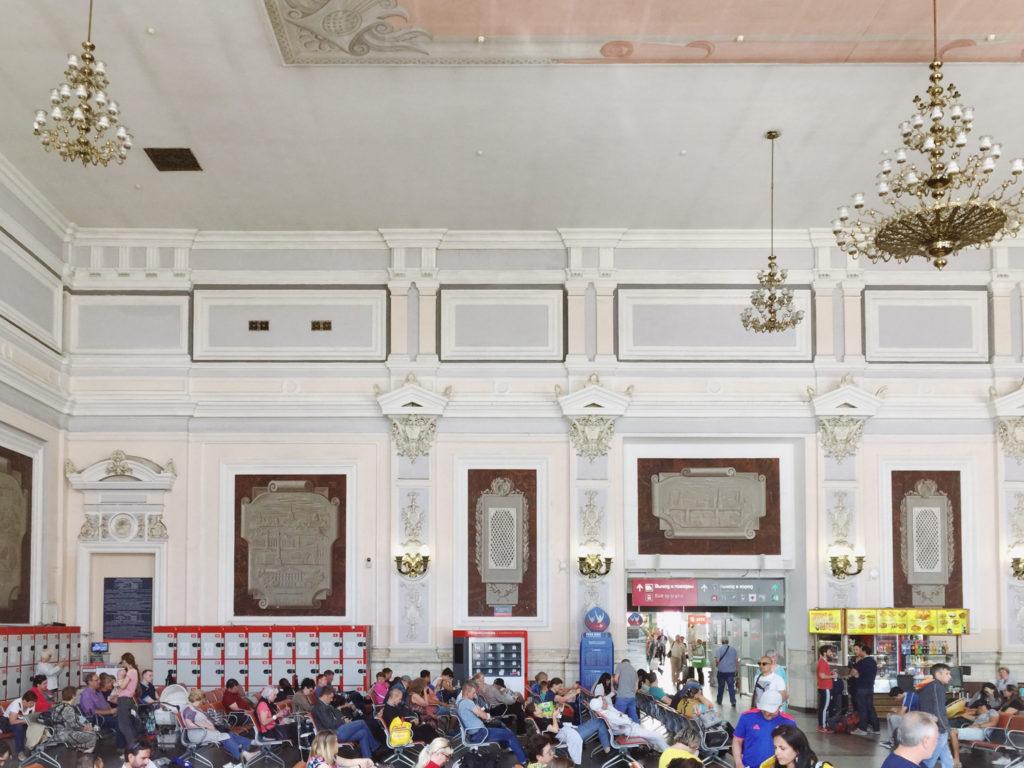 A train station in Moscow

5. The unspoiled beauty of St. Petersburg

After spending the day in Moscow, we took the train to St. Petersburg.

Often called the “Venice of the North”, St. Petersburg is a beautiful city with elegant promenades, canals, and sea air. It had a Scandinavian vibe, reminding me of Stockholm or Copenhagen.

If you’re an architecture-lover, you’ll enjoy St. Petersburg. The city is very intact, and somehow escaped the Soviet treatment of destroying beautiful historical buildings and replacing them with cement blocks.

Tip – If you have time , take a day trip to the Catherine Palace. The 18th-century palace contains a reconstruction of the legendary Amber Room, which was stolen by the Nazis during WII and never found. The room was then painstakingly recreated between 1979 and 2003. You can book a private tour of Catherine Palace here. 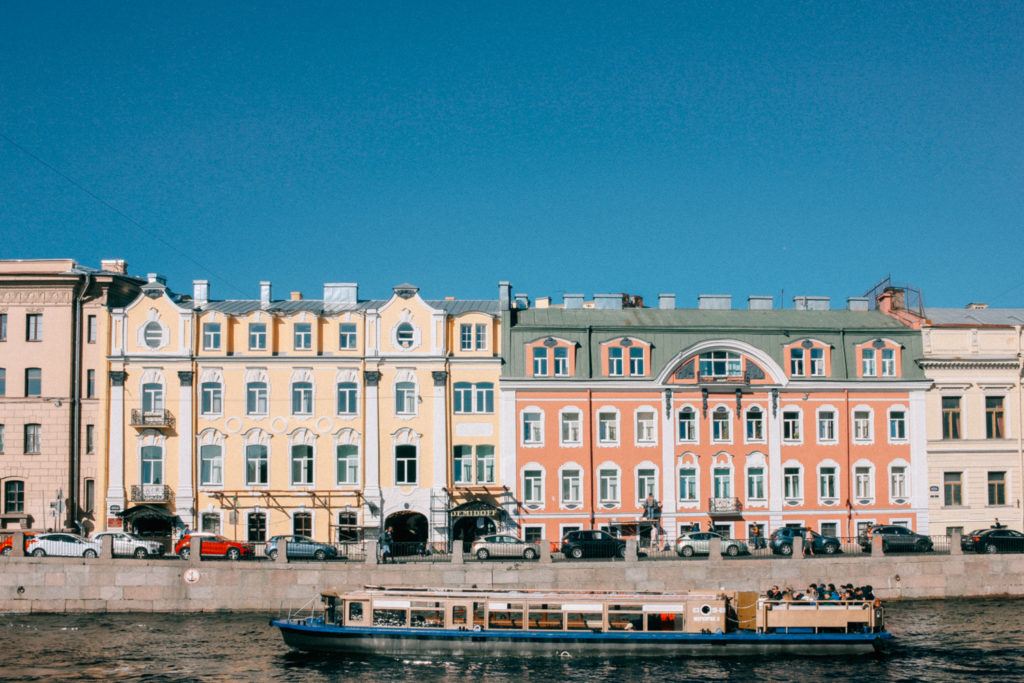 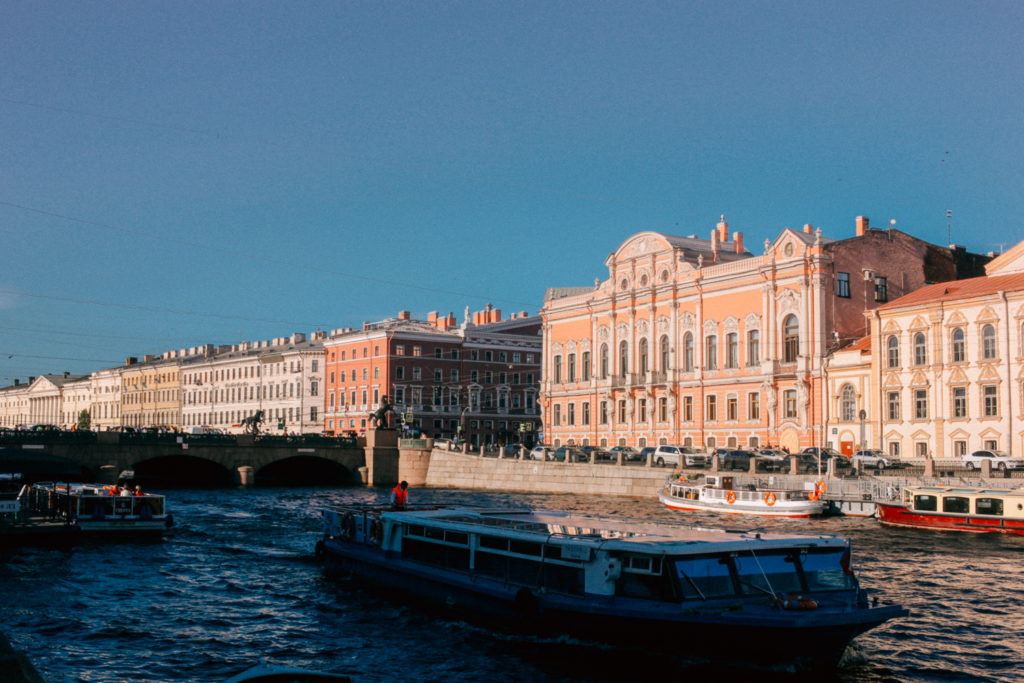 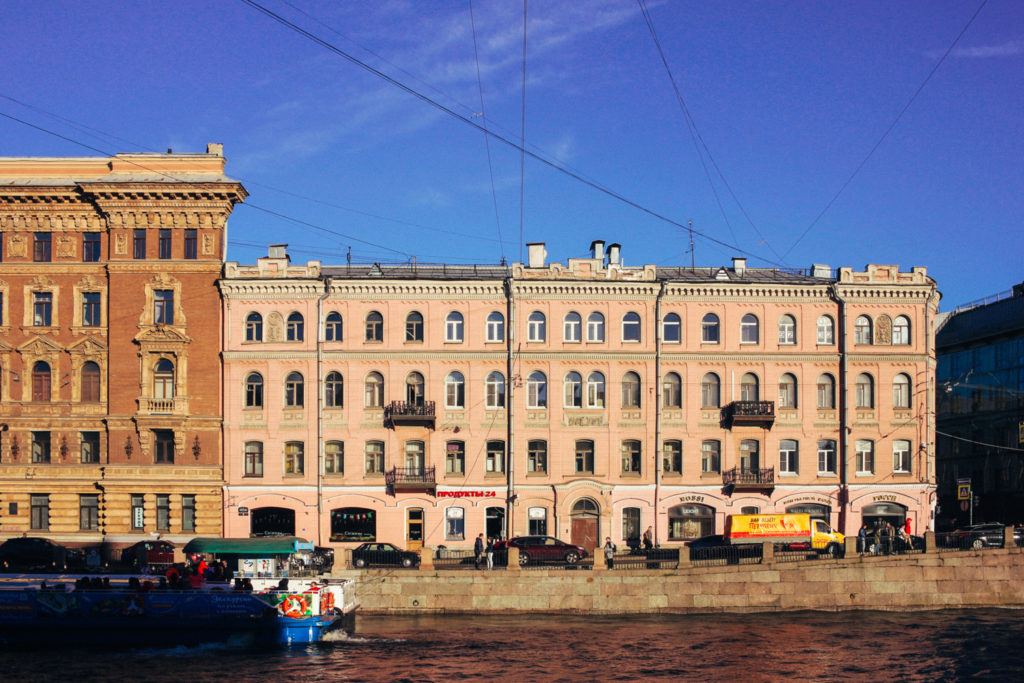 If you do one thing in St. Petersburg, make it the State Hermitage Museum.

The second-largest art museum in the world (next to the Louvre), the Hermitage has more than three million works of art including works by Rembrandt, Rafael, Picasso, and Van Gogh. You could spend a week there and only see a fraction.

The Hermitage occupies six buildings. One of the joys of visiting the museum was exploring the extravagant Winter Palace, which was once the Romanov’s favorite residence.

Ticket lines at the Hermitage can be super long. I recommend buying your tickets in advance directly from the Hermitage Museum website here. If you are interested in a tour of the museum, you can book a small-group tour here. 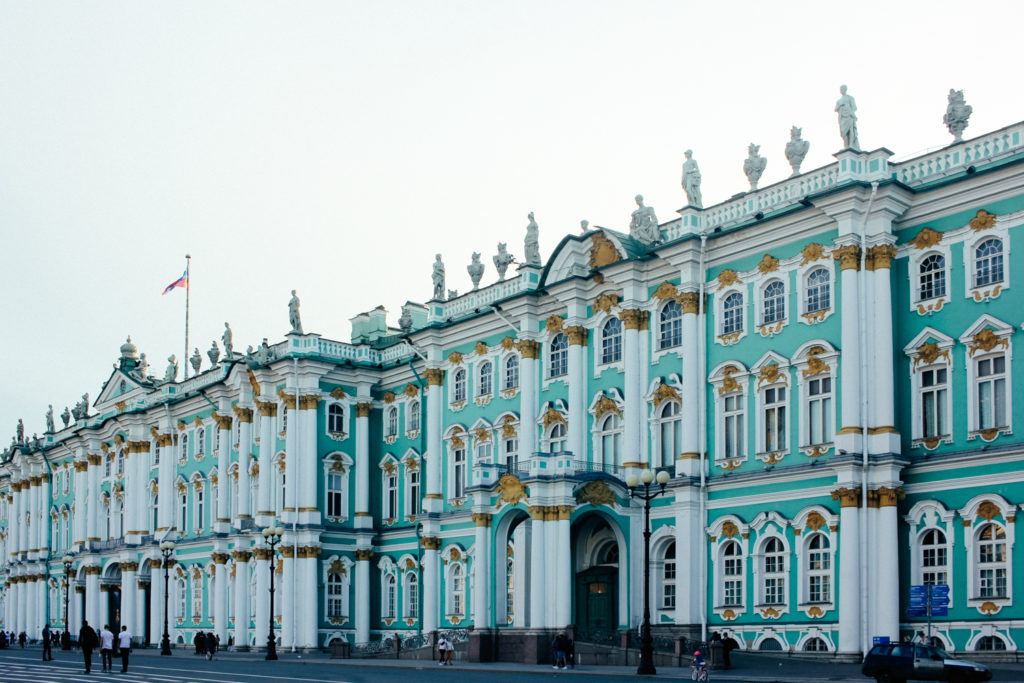 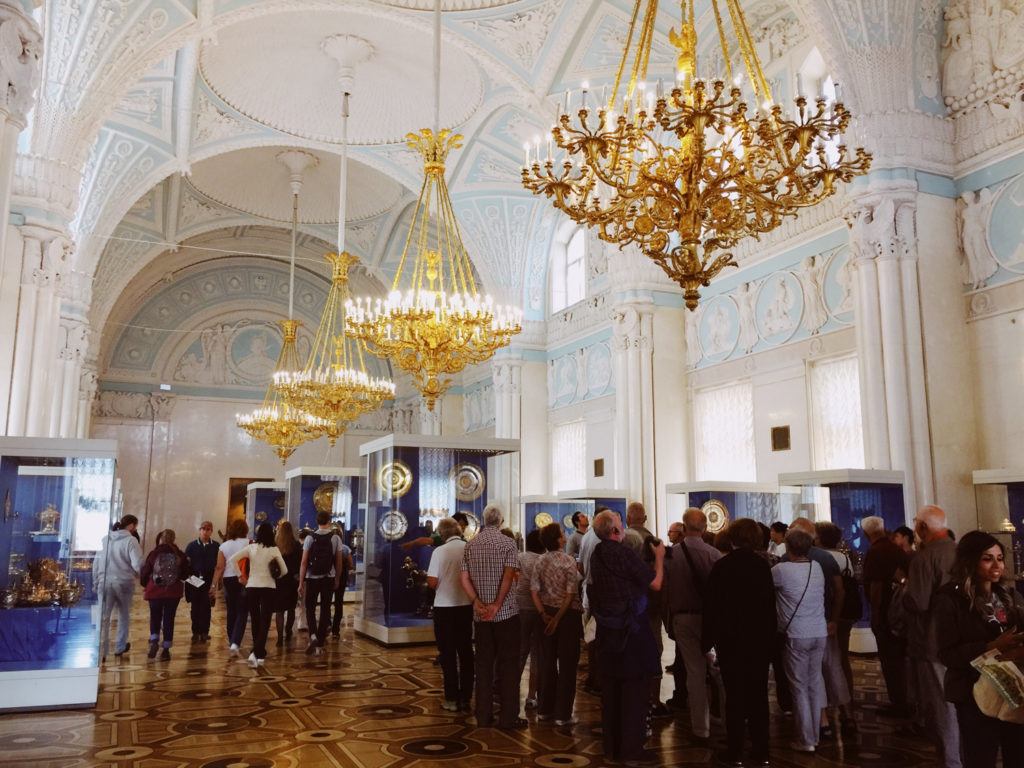 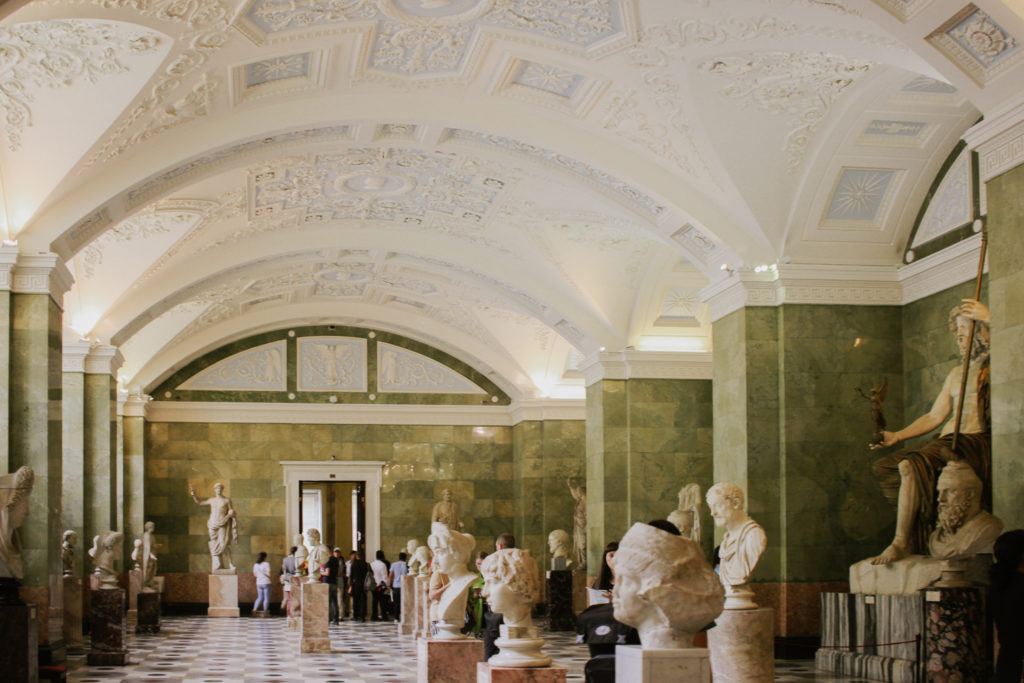 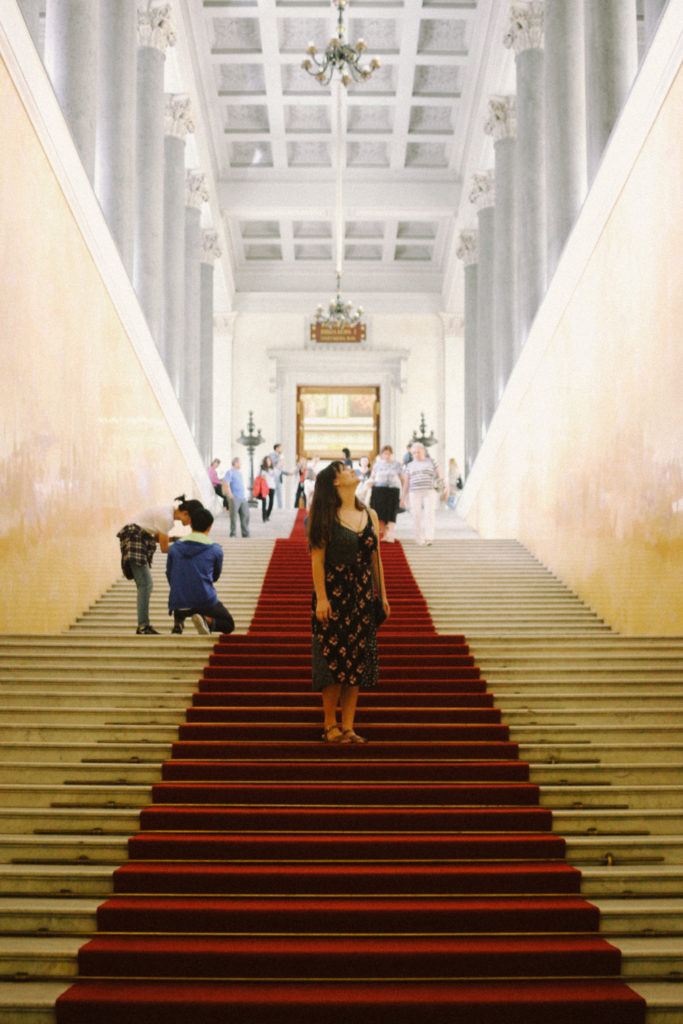 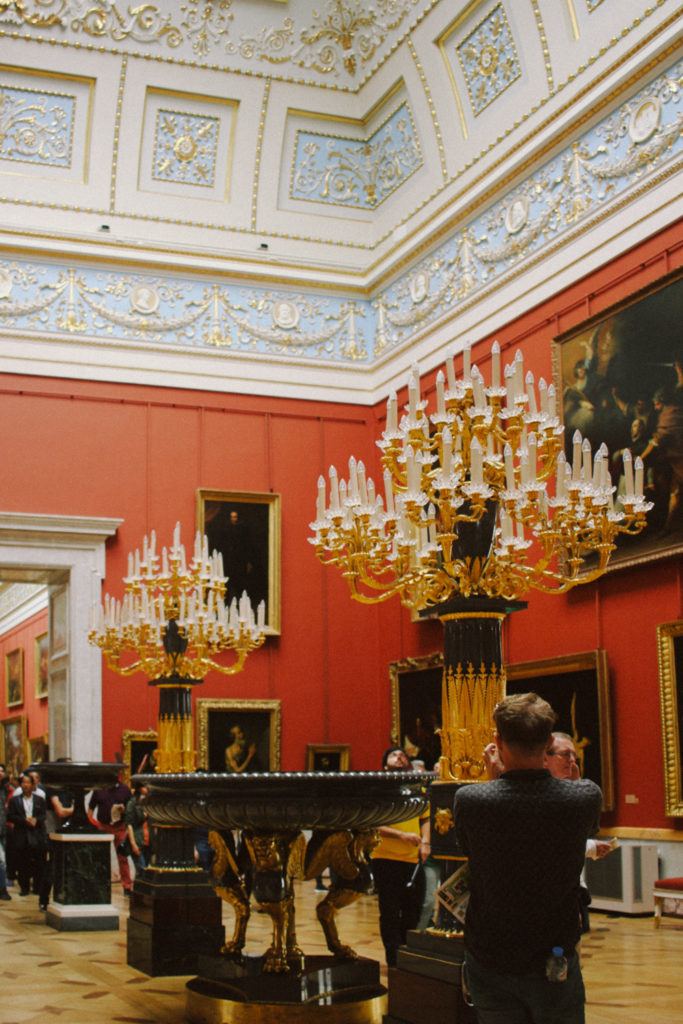 7. The Fabergé Museum, which has NINE priceless Fabergé eggs

If you’re spending a few days in St. Petersburg, stop by the Fabergé Museum, which boasts the second largest collection of Fabergé eggs in the world.

When the Romanovs were forced out of St. Petersburg, they left behind 50 Fabergé eggs (43 of which are still known to exist).

Impressively, the museum has nine imperial Easter eggs. It was incredible seeing the eggs up-close, as they are insanely intricate. Did you know each egg took a year or two for a team of craftsmen to create?

Many of them also have surprises inside. I loved seeing the famous “Hen egg” which is a chicken egg that contains a golden hen.

Tips for visiting the museum: The Fabergé Museum is much less popular than the Hermitage Museum, so you can buy your tickets at the door. Like the Hermitage, it’s housed in a former palace. 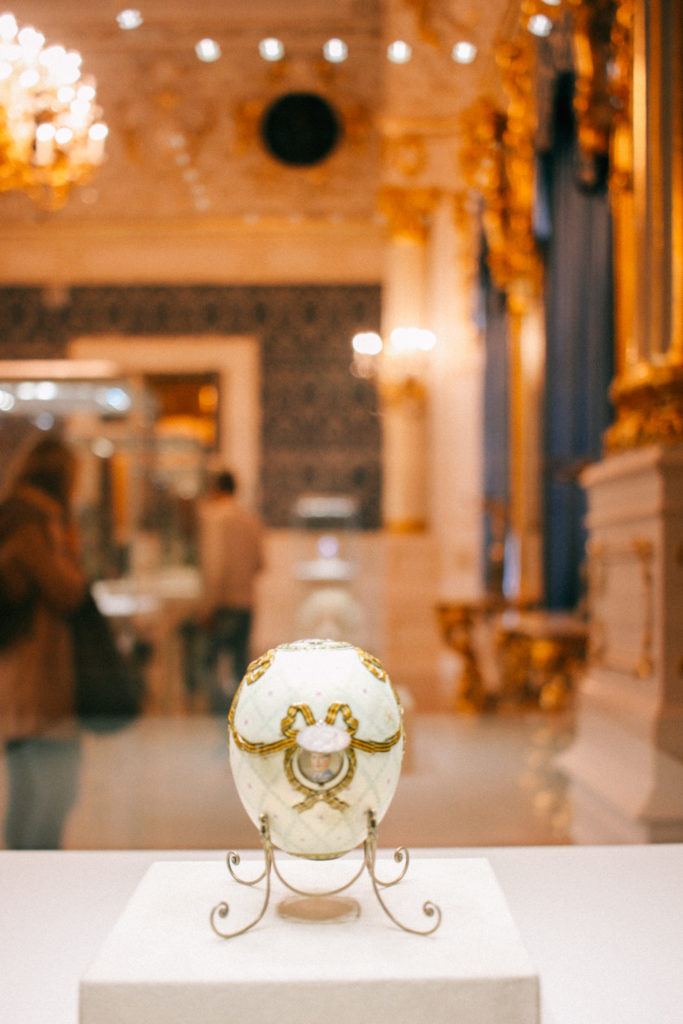 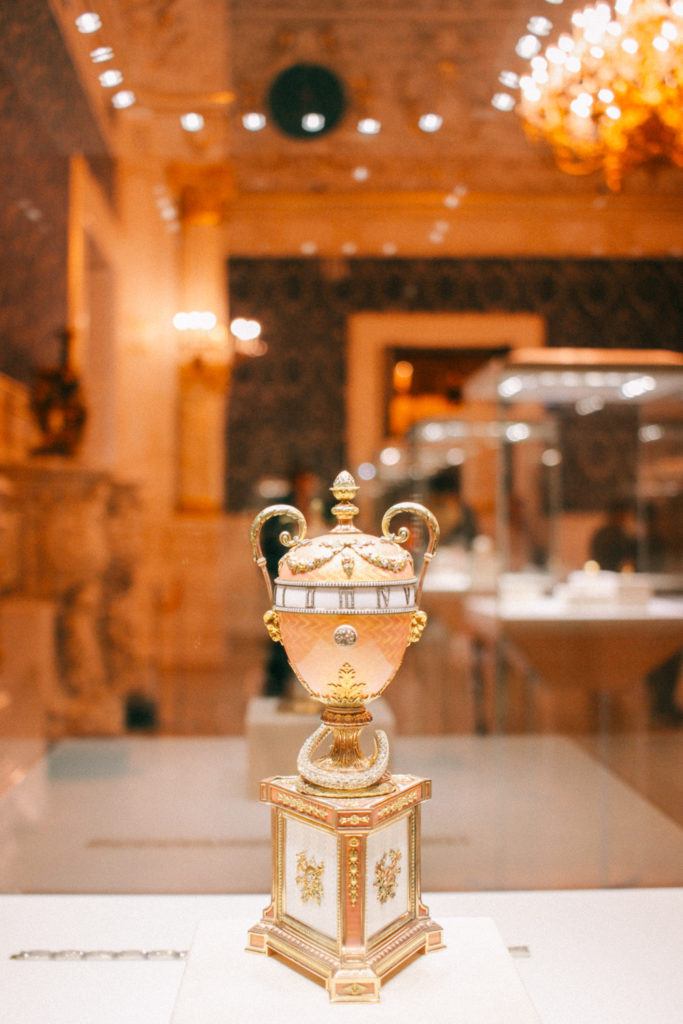 8. The restaurants, bars, and nightlife

Russia isn’t all history and museums. St. Petersburg and Moscow are both modern cosmopolitan cities, with great restaurants, bars, and nightlife.

Clubbing in Russia was especially fun during the World Cup, as we met tons of fans from all over the world. Surrounded by Spanish speakers, I almost felt like I was Medellin, not Moscow.

One bonus of clubbing in Russia – if you visit in summer, the sky never gets dark. 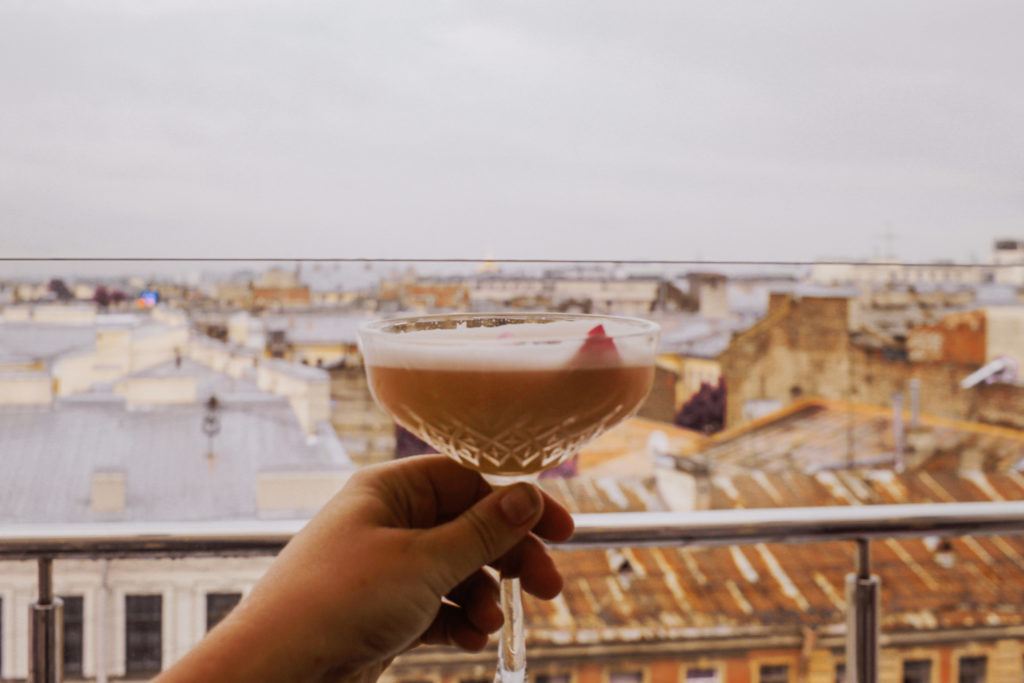 At a rooftop bar in St Petersburg.

As a bit of a Russophile, spending time in Mother Russia was so much fun. I loved seeing Cyrillic script on the shopfronts, hearing Russian all around me, and passing by things you would only see in Russia, like shop-windows full of fur hats.

We even spotted a babushka-themed thermos at Starbucks.

It was all just so… Russian. 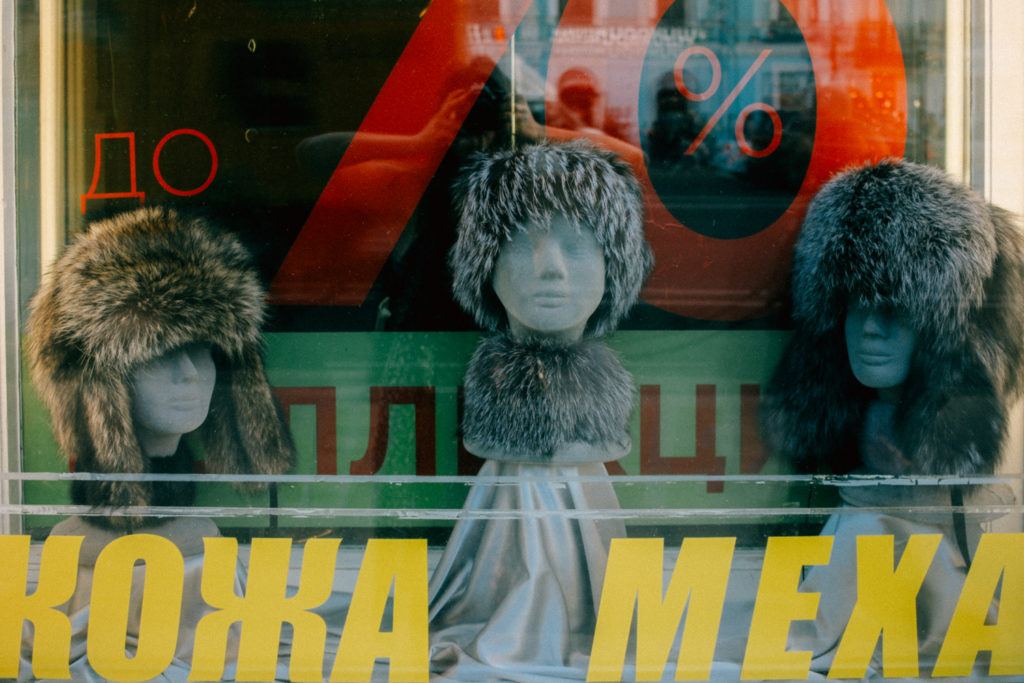 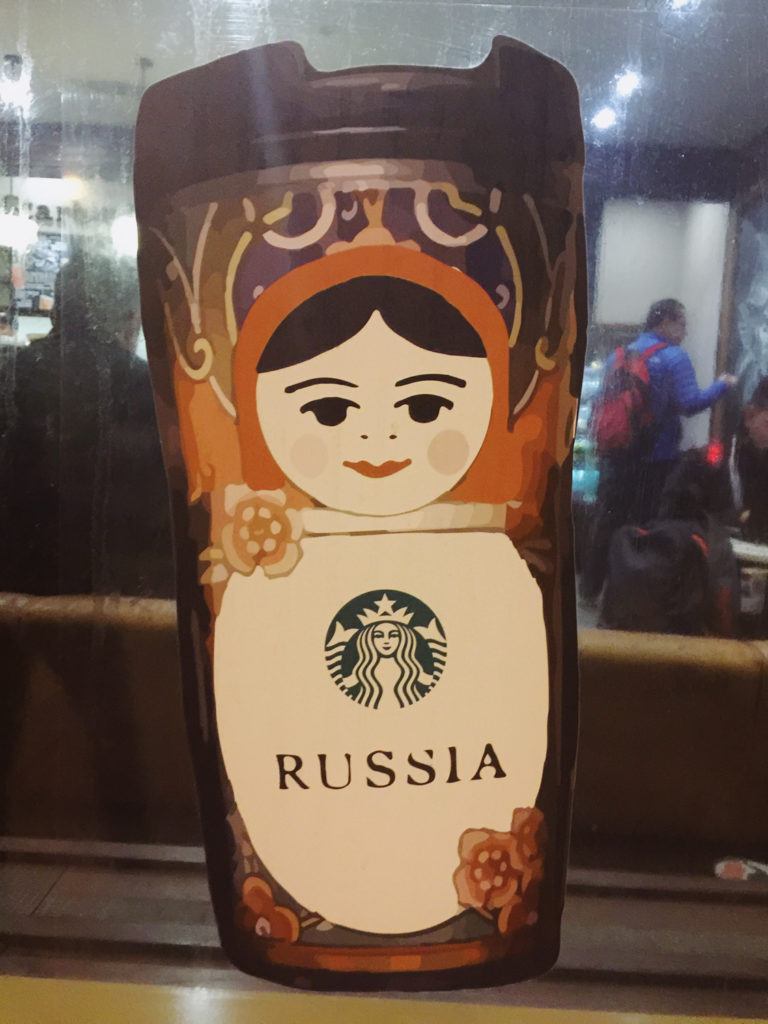 In Russia, even your Starbucks thermos can be a Matryoshka doll 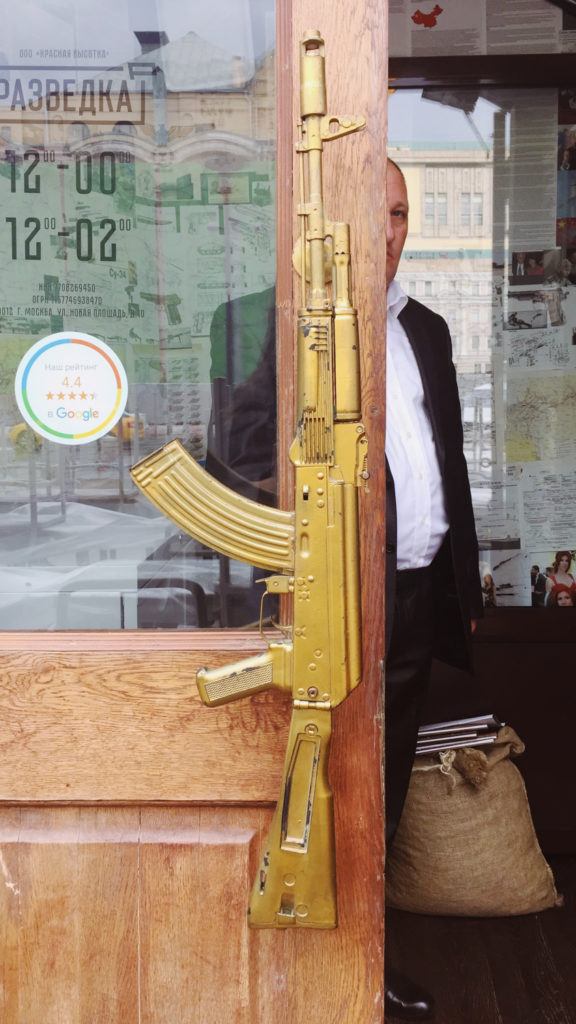 A gold spray-painted AK-47 door handle. Why not.

All in all, I loved my trip to Russia. The fact that it was spontaneous made it even better — because I hadn’t planned anything, the whole trip was a surprise. 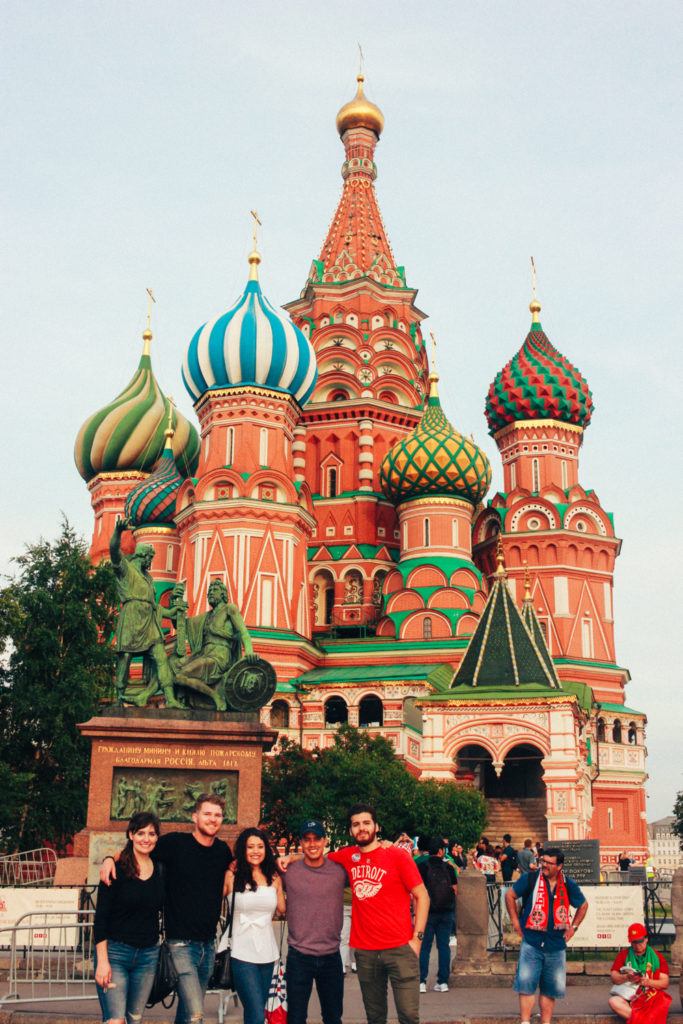 Have you ever visited Russia? What did you think?